/!\ The HTML build of the game seems to have a strange delayed audio issue ! I recommand playing the Windows version instead ! /!\

Your task will be to deliver mini-planets throughout space, across 12 different levels. However, it will not be easy, as multiple obstacles such as asteroids and death blocks will stand in your way...

On your trusty rocket, press and hold Z / W to fly upwards ; release it if you want to go down. You need to grab mini-planets on your way. Once you have one, press X to throw it ! Aim for the vortex corresponding to the planet's color. But be careful ! Throwing a planet in the wrong vortex will is an instant failure. By the way, you should know that pressing C when having 2 planets in hand will switch their position, so that you can choose which one to throw.

Your rocket can handle 2 hits before exploding at the 3rd one. You can evaluate how much damage it has received by looking at the black smoke it emits (although the levels are so short that you probably don't have any trouble remembering how many hits you've taken...)

And... that's about it for the game ! There's really not much to it, it's just some simple fun. The final levels can get pretty tough, so good luck ! I hope you have playing it !

This game was made for the Blackthornprod Game Jam 2, using the Godot engine. Softwares used are Gimp, Bfxr, and Bosca Ceoil.

Hey! I really enjoyed playing this! It was such a nice casual game that brought back memories of early newgrounds and coolmathgames haha good work! Here's my video if you want to check it out :D

I love the art style, very slick. Colorful, vibrant, clear and cute. And the in-game damage indications are great. I love the animated level intro and outro text and the crazy creative asteroids that appear throughout the game. Oh, and the way the character just casually balances the planets in a stack while flying is hilarious!

The planet color-matching mechanic is great and is certainly a clever way to increase the pressure while flying. :) And I also love that aiming planets is forgiving with accuracy. Oh, and that the planets even return to you if you do manage to miss! I thought difficulty was very nicely balanced, levels were forgivingly short, and if you're struggling, you can learn the level patterns if you persist.

I love the detailed instructions you provide, and being given the option of multiple controls for rocket movement. I also appreciated having the context-sensitive reminders of controls displayed in-game, such as quitting to the menu, and especially when it's time to finally switch planets for the first time! The rocket was a little tricky to control, but in a way that was easy to understand, which is what made the game fun--you had to learn to plan ahead and anticipate its turning speed. Great!

Nice use of audio panning, and I enjoyed the range of sound effects. They all felt very fitting. I also adore how the music changes and progresses and ramps up in intensity as the player gets further. That's something I love in games. Great work.

Oooh, made with Godot! Nice, I've used Godot a bit in the past. And Bosca Ceoil is something I learned of through this game jam and am definitely gonna try out!

Overall, I found it fun and challenging, and satisfyingly tricky. Very nice! Oh, and it's great to see multiple versions offered. :)

Thanks for the great feedback !

Art is not something I'm really skilled at, so I'm happy that the quick drawings I made in gimp were not too bad... I always try to animate the UI as much as I can, I think it's an easy way to give more life and personnality to a game. As for the planets stacking, I was like "I want the character to hold multiple planets at a time but he also needs to hold the rocket at the same time.. let's just make him stack the planets", I really wanted to make more planets so that the effect would be funnier but I didn't have time in the end...

As I said I really wanted to make more planets and I even designed 2 more, but I didn't find an interesting enough way to play with the color matching mechanic beside "mash C to get the right planet at the right moment", so it felt like a cheap way to add difficulty... that's why I ultimately stayed with 2 planets only. For the forgiving accuracy, I figured that it wouldn't be much fun to fail a level right at the end because you didn't aim well, but I still wanted it to be a sort of final mini challenge at the end of each level, that's why the goals are moving so fast in the last levels. I think short levels were the best choice because it allowed me to design levels pretty quickly and to add enough new ideas without making the game too long, especially since I didn't add a save feature or a level select screen (which I wanted to do but didn't have enough time to)

Displaying the controls on the title screen are a nice and easy way to tell everything without losing too much time doing a tutorial for example. And yeah, since switching planets is only introduced halfway through the game, I figured it was necessary to remind about it when it finally appeared x) For the rocket, now that I've replayed the game with a fresh new look, I think I should have made it a bit more responsive, because some obstacles near the end of the game seem almost unavoidable if you don't know about them in advance, so I am a bit disappointed that I couldn't realize it before the deadline. Oh well, it's a traditionnal game jam error !

Music and sound effects... I spent way less time working on them than I usually do, so I didn't have the time to tweak the sound effects like I wanted to. In the end, I think it could have been worse, but I'm not satisfied with some of them yet (the victory sound for example is a bit underwhelming I think, it just sounds like a coin from a Mario game). As for the music, it's always my biggest enemy in a jam. I have absolutely zero musical skill, so in the end, I just do like I always do, which is taking the percussions in boscas ceoil and making a rythm which gradually speeds up. But this time I decided to make it speed up between levels instead of during each level, which ended up way better than I expected x)

I switched over from Unity to Godot because I felt Unity was becoming a bit too complicated to me... and most notably because I like Godot's interface and the fact that it's really light and open source. It's actually only my second game made with this engine, and the first one was a FPS that I made during another game jam... while learning the engine at the same time ! It's definitely something I would recommand anyone not to do, because for me at least, it was pretty visible in the game x)

Well thanks a lot again for your really detailed feedback, it always feels super nice to receive ! I ended up answering like you did in the comment I left on your game, because reading it was really fun and put a smile on my face ! Aren't game jams wonderful ? :D

Oh ? Did the game not work for you ? Have you tried both the HTML5 and Windows versions ?

no, sadly not. I only got this error message :( 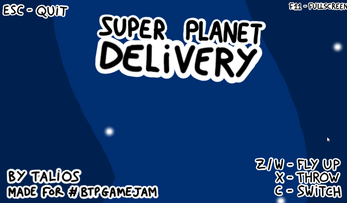